skip to main | skip to sidebar

How Well Has The Media And Government Informed The Public About CO2 Levels In The Air?

By Gregg D Thompson
Ask yourself, your friends, family and work associates if they know the answers to the following questions about Carbon Dioxide (CO2). Be sure to write your answers before looking at the following pages.
Question 1. What percentage of the atmosphere do you think is CO2?
Question 2. Have you ever seen the percentage given in any media?
Question 3. What percentage of the CO2 is man-made?
Question 4. What percentage of the man-made CO2 does Australia produce?
Question 5. Is CO2 is a pollutant?
Question 6. Have you ever seen any evidence that CO2 causes a greenhouse effect?
I have asked over 100 people these questions. Virtually everyone says they don’t know the answers so ask them to tell you what their perception is by what they have learnt from the media, the government and Green groups. Let them know there is no right or wrong answer as you are just doing a survey as to what people have perceived the answers to be from these sources.
The answers to these questions are fundamental to evaluating the global warming scare YET almost no one knows the facts. However, without this knowledge we can’t make an informed decision about whether Climate Change is natural or not.
On the following pages are respondent’s perceptions followed by the correct answers. The bulk of the respondents (over 100 to date) are educated fairly well to very well. They comprise business managers in a diversity of large and small companies, those in medical profession, accounting, law, sales, engineering as well as scientists and trades people.

ANSWERS TO QUESTIONS
Q1. What % of the air is CO2?
Respondent’s Answers: nearly all were 20% - 40%, the highest was 75% while the lowest were 10%- 2%.
The Correct Answer: CO2 is less than a mere four 100ths of 1%! As a decimal it is 0.038%. As a fraction it is 1/27th of 1%. (Measurements for CO2 vary from one source to another from 0.036%- 0.039% due to the difficulty in measuring such a small quantity and due to changes in wind direction e.g. whether the air flow is from an industrialized region or a volcanic emission etc)
Nitrogen is just over 78%, Oxygen is just under 21% and Argon is almost 1%. CO2 is a minute trace gas at 0.038%. We all learnt the composition of the air in both primary and high school but because most people don’t use science in their day to day living, they have forgotten this. Also, the vast bulk of the population have very little knowledge of science so they find it impossible to make judgements about even basic scientific issues let alone ones as complex as climate. This makes it easy for those with agendas to deceive us by using emotive statements rather than facts. For a detailed breakup of the atmosphere go to: http://en.wikipedia.org/wiki/Atmosphere_of_Earth#Composition
Q2. Have you seen a percentage for CO2 given in the media?
Respondent’s answers: All said ’No’.
Q3. What % of CO2 do humans produce?
Respondent’s answers ranged from as high as 100% with most estimating it to be between 75% to 25% and only four said they thought it was between 10% and 2 %.
The Correct Answer: Nature produces nearly all of it. Humans produce only 3%. As a decimal it is a miniscule 0.001% of the air. All of mankind produces only one molecule of CO2 in around every 90,000 air molecules! Yes, that’s all.
Q4. What % of man-made CO2 does Australia produce?
Respondent’s Answers ranged from 20% to 5%.
The Correct Answer is 1% of the 0.001% of man-made CO2. As a decimal it is an insignificant 0.00001% of the air. That’s one, one-hundredth thousandth of the air. That is what all the fuss is about! That’s one CO2 molecule from Australia in every 9,000,000 molecules of air. It has absolutely no affect at all.
We have been grossly misled to think there is tens of thousands of times as much CO2 as there is!
Why has such important information been withheld from the public? If the public were aware that man-made CO2 is so incredibly small there would be very little belief in a climate disaster so the media would not be able to make a bonanza from years of high sales by selling doomsday stories. Governments and Green groups would not be able to justify a carbon tax that will greatly raise the cost of everything. Major international banks and the stock market would not make massive profits out of carbon trading and many in the science community would not be getting large research grants.
Q5. Is CO2 is a pollutant?
Respondent’s Answers: All thought it was a pollutant, at least to some degree.
The Correct Answer: CO2 is a harmless, trace gas. It is as necessary for life - just as oxygen and nitrogen are. It is a natural gas that is clear, tasteless and odourless. It is in no way a pollutant.
Calling CO2 a ‘pollutant’ leads many to wrongly think of it as black, grey or white smoke. Because the media deceitfully show white or grey ‘smoke’ coming out of power station cooling towers, most think this is CO2. It is not: it’s just steam (water vapour) condensing in the air. CO2 is invisible: just breathe out and see. Look at it bubbling out of your soft drinks, beer or sparkling wine. No one considers that a pollutant - because it’s not. CO2 in its frozen state is commonly known as dry ice. It is used in camping eskys, in medical treatments and science experiments. No one considers that a pollutant either. CO2 is emitted from all plants. This ‘emission’ is not considered a pollutant even though this alone is 33 times more than man produces! Huge quantities of CO2 are dissolved naturally in the ocean and released from the warm surface. This is not considered a pollutant either. 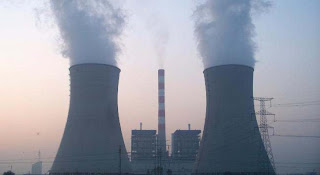